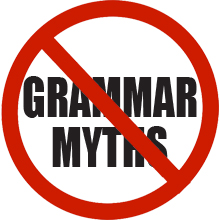 I’ll admit, I’m an easy target for “grammar mistakes you need to stop making” lists, but they’re starting to get on my nerves.

The latest one I saw — 15 Common Grammatical Errors That Drive You Completely Insane (on Buzzfeed, of course) — started strong, with “your/you’re” and subject-verb disagreement. But then, at No. 3, was split infinitives — and what drives me “completely insane” is not split infinitives, but people saying that split infinitives are wrong. They’ve never been against the grammar of English; someone just decided that they shouldn’t be split and dictated that as a Law of English (Grammar Girl has a great summary of this).

Nos. 11 and 12 are matters of grammar, but ones that are in transition: “who/whom” and “they” as a gender-neutral singular. I’ve said before that I wish “whom” would just go ahead and make its graceful exit from English, and that “they” is as good an epicene pronoun as any, probably better because we all say it already anyway. Since so few of us use “whom” in every object position (Who unironically says “With whom are you going to the movies?”) and most of us use “they” as a singular, do these two items really drive anyone “completely insane”? (And yes, “since” can be used to mean “because” and has for hundreds of years.)

Now, I’m an editor, and I teach editing, so I’m not saying let’s throw caution to the wind and just write whatever, however. There are conventions for professional English, and most of them are there for a reason: clarity, precision, accuracy, or all three. But lots of “rules” have crept in that have a) nothing to do with English grammar, and b) nothing to do with making writing clear, precise or accurate. (See over/more than, due to/because of and not using “that” for people as a few examples.) They’re shibboleths, or they’re outdated, or they’re simply misguided attempts at clarity that don’t, in fact, make writing clearer.

These need to go, and we need to stop putting them in lists — and stop sharing lists that include them.

Writing is hard enough without worrying about manufactured distinctions that add nothing to a sentence. Writers and editors, and teachers of writing and editing, need to focus on the grammar problems — and there are plenty — that can impede understanding, mislead readers, or simply make a writer look sloppy and unprofessional, instead of sending more grammar myths around the Internet.