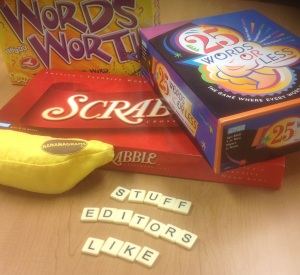 Editors tend to love words, word puzzles and word games. I asked editing friends, colleagues and strangers on Twitter what they liked to play, and I got a broad range of answers. The games everyone knows came up, of course, but some lesser-known ones got mentioned and I learned about a few new ones to try.

Scrabble, of course, and its online-only knockoff, Words With Friends, are editor favorites. The crossword-like play and mix of luck and strategy have kept Scrabble popular for decades. Competitive players have memorized a bevy of 2-letter words and Q-without-U words.

The older game Upwords, a board-game Scrabble variant, was also mentioned — it’s different because players can put letters on top of other letters as long as it still spells a word.

Bananagrams, a relative newcomer, is portable, fast-paced and easy to play with a larger group of people. Players draw letter tiles and spell words in a connected crossword-like grid as fast as they can. Speaking of crosswords, traditional crosswords — on paper or online — are also quite popular among editors.

Boggle, with its letter dice and plastic shaker, is an oldie-but-goodie, too, and a mobile-app version, Word Streak, is downright addictive. Ruzzle is another app variant. In these games, players spell words with connected letters — across and down, backwards, forwards and diagonally. Longer words get more points, and the time limit means the games are short and fast-paced.

Balderdash is a board game similar to the “dictionary game” (also called “Fictionary”). In these games, players try to guess the definitions of obscure words and get points for guessing correctly or having other players think their definition is correct.

Perquackey and Zip It both feature letter dice, but that’s about all they have in common. In Perquackey, the dice get rolled and players make words using the letters that come up. In Zip It, each player gets half the dice and puts them together to form words in a grid (like Bananagrams), using any side of the die they like.

In Scattergories, players have to list items that belong to a certain category and begin with a particular letter. In Apples to Apples, players match things (nouns) to a corresponding description (adjective).

Literally thousands of word video games are out there, for computers, game consoles and mobile devices. Some are specifically for children or English learners, but others are fun for adults, too.

Text Twist (online/download) and Jumbline (mobile app) start with a set of letters — five, six or seven — and a player spells words out of those letters. Whirly Word (mobile app) has six letters in a circle instead of a row, but the concept is the same.

Bookworm (online/download), Dropwords (mobile app) and SpellTower (download and app)are similar in concept and play. Players get a board of letter tiles and find words by moving along adjacent tiles. When a word is selected, the tiles disappear and new letters drop from the top of the board.

Languinis (mobile app) combines match-3 play (as in Bejeweled) with finding words using letter tiles. I hadn’t heard of this one before (thanks, @GreyEditing!) but I love Bejeweled and I love word games, so I downloaded it and discovered it’s addictive!